Figure 4 - Model of the laser equipment at the endplate with light simulated plane on first Aluminum strip. 7

The calibration system for the ALPHA-g rTPC is to provide a reference measurement of the electron drift direction and speed for a known configuration. These parameters are subject to environmental changes (pressure, temperature, gas mixture) as well as external drift voltage and magnetic field.

For comparing to a reference measurement, a consistent number of primary electrons at a defined geometrical location are required. Two methods have been considered.

The laser method with its external trigger capability and better defined electron emission has been deemed the preferred solution.

The top and bottom endplates have provisions for inserting the necessary optic module to deliver a laser plane intersecting the inner cathode cylinder. The initial laser beam in the order of 0.5mm in diameter is converted into a plane through a transparent cylindrical quartz rod of 5mm diameter within the detector volume. The plane has an aperture angle in the order of 90deg illuminating both sides of the drift path. Aluminum strips on pre-defined locations along the inner cathode will emit electrons when struck by the 266nm laser light. Using a triggered pulse laser source, the electron arrival on the anode wire and the induced charge on the cathode pads along the anode wire will provide the timing and Z position of the intersection point of the aluminum strip and the laser plane. The light plane is slightly rotated and tilted off the z-axis in order separate the Al strip electron cloud from reaching all the same wires. For the given rotation and tilt angles (45deg, 1deg) we have spaced the Al strips such that 2 anode wires will be separating the 2 electron clouds of two consecutive Al strips.

The mechanical modification to the endplate for the laser calibration option is minimal. They consist in: 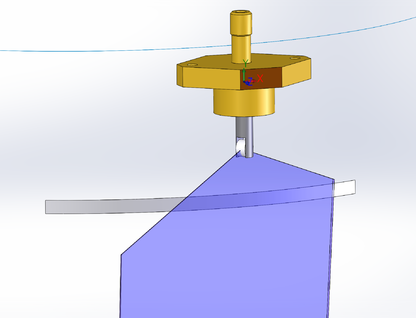 Figure 4 - Model of the laser equipment at the endplate with light simulated plane on first Aluminum strip.

Tests of the laser calibration system using the prototype show a clear pattern of the Al strips. Analysis of the pattern reproduces the strip position with good accuracy. Despite the strip pitch in the prototype being much tighter at 40mm instead of 265mm the peaks are very clearly separated in the z-pads. The amplitude variation between peaks is due to the laser intensity distribution which has not been investigated in detail. It is not a high priority because the laser system is not meant for pulse height calibration, but rather for time and position. 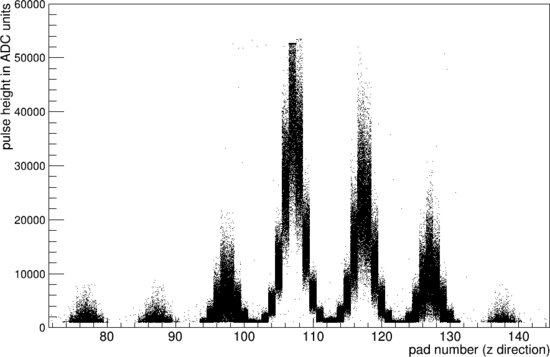 The laser plane is not inclined in the prototype, so a separation on the anode wires is impossible. The wider spacing for the final detector was chosen to allow for a good separation in the anodes.

As mentioned above the laser intensity distribution is not well understood yet, but we are confident we can illuminate the 4-5 strips closest to each laser port. The combination of shallow incidence angle and low geometric efficiency makes it questionable whether enough light can reach the far end of the TPC. It may be possible to increase the laser intensity to reach further strips at the expense of saturating the signals in the intensity maximum.

To reproduce the T2K laser calibration configuration in the Alpha-g rTPC, it would require shining the laser normal to the inner cathode surface. While the drift region is about 1m long for T2K, it is about 5cm in the Alpha-g. In addition the outer surface of the rTPC is fully occupied with the cathode pad readout electronics boards preventing any acceptable insertion of laser light direction normal to the tangent of its surface.

The remaining possible solution for the Alpha-g laser calibration is to shine the laser from its endplates. There the space is also quite restricted but available. In this configuration see Figure 1, the incident light angle varies from about 45 deg to less than 1deg due to the rTPC geometrical proportions. The electron emission efficiency at these incident angles varies substantially.

The shallow angle of the laser light on the central cathode cylinder is a concern for the electron emission efficiency. In order to quantify the parameter for the laser source specification, we have gone through multiple tests at UBC where a vacuum chamber with a 266nm laser was available. A dedicated mounting setup within the vacuum chamber permitted to rotate a plane holding our material sample, see Figure 2. The setup consisted in a double plate “capacitor-like” configuration, with one of the electrodes holding the sample and the other collecting the emitted electrons, see Figure 3. The signal was then collected through a dedicated DAQ for signal charge analysis versus incident angle on different material. 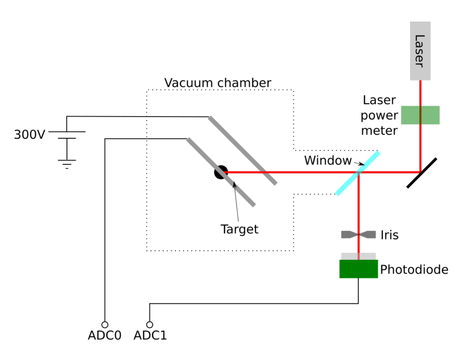 The Aluminum and copper have different “work function” values. The results from T2K showed electron extraction from the aluminum to be about 2 pe/mm2 while for copper around 0.03 pe/mm2. This ratio of 70 provides the necessary contrast for strip localization and therefore local drift time calibration. Similar tests at UBC were set up to possibly confirm these numbers. In addition the work function values found in literature fluctuate sufficiently that the selected materials may overlap with a 266nm wavelength. Therefore we added to our test the target composition (Al, Cu, C) as a variable to see if a better suited material can be identified.

In the Alpha-g case, the laser incident angle is grazing the cathode surface. Hence we included in the incident angle of the laser beam on target as a variable as well (see. Figure 4). Our tests did not reproduce the T2K results. That ratio of collected electron to the estimated number of photons on target versus the photon (laser beam) incident angle is not as large as seen in T2K at normal incidence. But we did expect to see a large variation of electron emission as we move away of a normal incidence. A proposed method to recover those “missing” electron due to the grazing incident angle, was to “scratch” the surface of the target (aluminum) to have some normal area to the incident laser light (note that 90deg incident angle is normal to the surface). This is visible with the “Al scratched 2” plot (the Alpha-g incident angle range is between 0.5 and 45deg). The effect of the scratching does increase the emission at grazing angle quite substantially, which is what we were looking for.

Unfortunately it was not possible to get reasonable values comparing different target materials. It remains unclear why this is the case.

The material options for strip/cathode combinations were aluminum on copper or aluminum on carbon loaded Kapton. Both cathode materials are suitable for the rTPC. In light of the prototype results shown above it was decided to stick with the copper cathode and scratched aluminum strips. 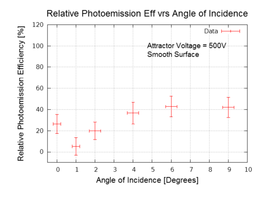 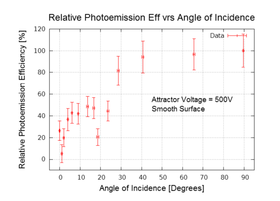 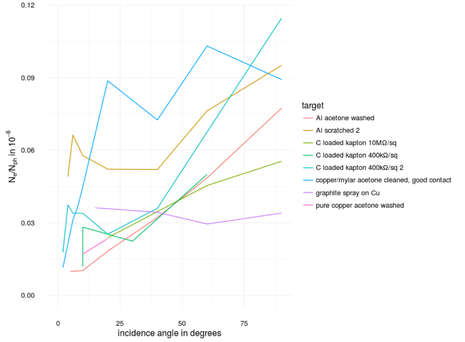