Figure 2 - Simulated signals on a set of neighbouring anode wires, demonstrating the opposite-sign induction on neighbours. 8

Figure 5 - Anode signal: blue is raw induced current, orange is amplified signal. The spikes that are visible in the raw pulse are indicative of the arrival of individual electron clusters 11

Figure 11 - Radius versus drift time determined from the self-calibration method, the red line represents the results from Garfield++. 18

Figure 13 - Two orthogonal views of the same pion trajectory in the presence of a magnetic field. The trap volume is shown in yellow. 20

The results of the simulations will be compared to those of the prototype and the final detector in order to gain insight into their functionality.

General acronyms or terms used for the ALPHA-g experiment

Particle tracking in the ALPHA environment is challenging: the distance between the annihilation point and the first measurement of the annihilation products is of the order of several centimetres and the abundance of material with high density causes a degradation of the tracking performance due to multiple scattering. In addition, this scattering material, with high atomic number, provides also the ideal environment for the high energy photons (produced, e.g., in the instantaneous decay of the neutral pion) to create electron-positron pairs. Since these particles do not directly relate to the antihydrogen annihilation point, they add a challenge to the vertex determination.

A Monte Carlo simulation of the ALPHA-g radial TPC is performed with the Geant4 simulation package in order to develop and test the reconstruction of the vertex. Initially, the simulation hinged on the determination of an optimal drift radius and pad size. The geometry of the simulation includes all the features of the ALPHA-2 apparatus, in the absence of a complete model for ALPHA-g. The apparatus is immersed in a uniform one Tesla magnetic field. The primary particles are charged and neutral pions, i.e., the antihydrogen annihilation products. Their momenta are assigned by assuming that antihydrogen annihilates at rest. The physical processes taken into account for the simulation include the decay of the neutral pion into two photons, the electron-positron pairs production and the multiple scattering in the ALPHA apparatus. The charged particles reaching the active volume of the ALPHA-g radial TPC ionize the gas according to the photo-absorption ionization (PAI) model. Since Geant4 is not designed to propagate particles under the influence of an electric field, the electrons produced by the charged particles in the gas volume are projected to the anode wires by using data imported from another simulation package – Garfield++. 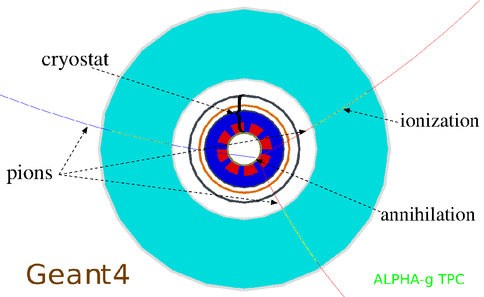 The geometry of the ALPHA-g apparatus is borrowed from the current ALPHA design, while the details of the new setup (cryostat, magnets, etc.) are in their final design phase. Of course, one obvious difference with respect to the existing apparatus is that ALPHA-g has its axis parallel to the Earth's gravitational field, i.e., it is vertical.

The main goal of this simulation is to reproduce what happens when an antihydrogen atom escapes the confinement. Therefore, the simulation begins by tracing a number of charged and neutral pions, originating from the antihydrogen annihilation point, through the apparatus, based on well-established physical models.

The interaction of the antihydrogen annihilation products with the medium in the gas chamber is described by the PAI model. The primary ionization is spread over the anode wires, based on the Garfield++ simulation of the Lorentz angle. Moreover, the signal induced by an electron avalanching close to an anode is calculated from a signal template obtained in Garfield++. The signals (of opposite polarity) induced into the neighbouring wires are also calculated. 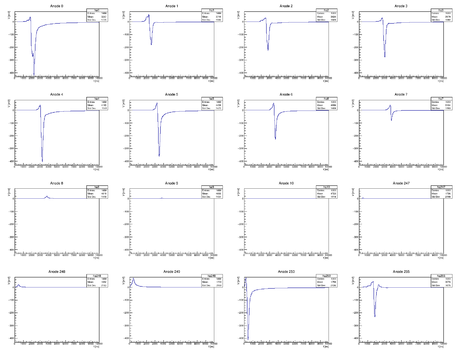 Figure 2 - Simulated signals on a set of neighbouring anode wires, demonstrating the opposite-sign induction on neighbours.

Figure 2 shows an example of the signals induced on neighbouring anode wires. The pads facing the wire involved in the electron avalanche receive a signal contribution proportional to their distance from the avalanche region. The signal calculation for each electrode is repeated for each electron drifting to the anode wires and, after the appropriate summation, stored in a ROOT file for later analysis.

A detailed simulation of the rTPC was set up in Garfield++ in order to understand the electron drift both in the radial field and in the more complex field region near the wires, as well as predict the signals induced on the anode wires and signal pads.

In order to get familiar with the usage of Garfield++ and as a toy model to cross-check modifications to the simulation a planar test geometry was simulated as a first step. Additionally Magboltz (a FORTRAN code called from inside Garfield for solving the Boltzmann equations in electric and magnetic fields) was used to examine key gas parameters like drift velocity (Figure 3) and Lorentz angle for different gas mixtures. Currently all further simulations assume 90:10 Ar/CO2 at atmospheric pressure. 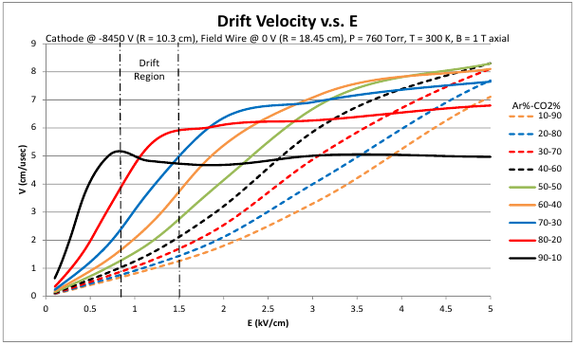 Garfield++ offers the option to create the drift electrons via a realistic ionization model provided by the HEED (High Energy ElectroDynamics) code. This means a primary particle (in our case usually a pion) with a given momentum is sent through the detector volume, reacting to the present electric and magnetic fields, generating ionization clusters of varying size statistically distributed along its track. The code includes secondary ionization caused by high energy primary electrons.

Once created, electrons (and ions) drift along a line defined by the local electric and magnetic fields. Garfield allows the electron drift to be simulated at two basic levels of realism, “Monte Carlo” and “microscopic” or to be solved analytically by the Runge-Kutta-Fehlberg method. In the interest of simulation time, most of the current rTPC simulations use the latter method, although comparison studies have been made, showing mostly good agreement between the methods. An example showing only the first electron generated for every fifth cluster is shown in Figure 4. 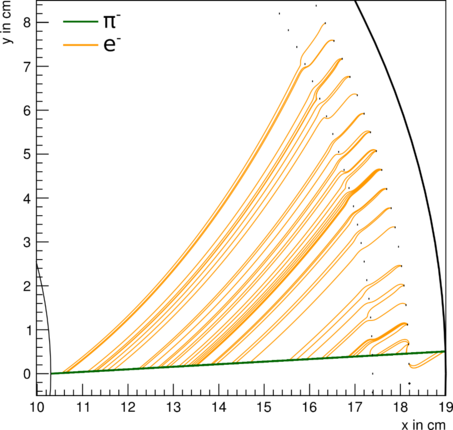 In order to obtain a formula translating electron drift times and position of the affected anode wires to points of ionization in space single electron drift lines crossing the entire radius range were also recorded.

As part of the simulation Garfield can calculate the current a drifting charge induces on electrodes in the vicinity, with the vast majority of the signal in the ALPHA-g setup being caused by ions created by avalanches in the high field near the anode wire. This “raw” signal can then be convoluted with a user-defined response function to simulate the effect of amplifier electronics.

An example of a raw anode signal and the same anode signal convoluted with the amplifier response is shown in Figure 5. 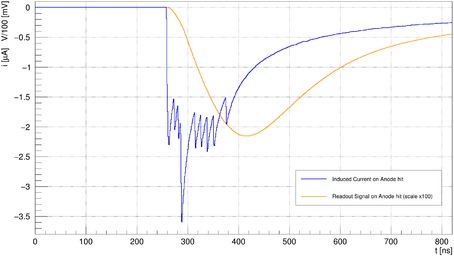 Figure 5 - Anode signal: blue is raw induced current, orange is amplified signal. The spikes that are visible in the raw pulse are indicative of the arrival of individual electron clusters

It is not feasible in terms of magnet construction to insist on a homogeneous magnetic field over the entire length of the TPC. While homogeneity is good over most of the length, the magnetic field will have a non-negligible radial component near the ends. Unfortunately Garfield++ does not support inhomogeneous magnetic fields out of the box, so some modifications had to be made to add the possibility to create the magnetic field from a three-dimensional field map text file. Currently the available field map is rotationally symmetric, but can be replaced by a more detailed map once one becomes available.

A second shortcoming of Garfield is that while it allows the use of signal pads (or strips) in planar geometry, it does not provide such a feature for a cylindrical chamber. We succeeded in adding this possibility, allowing for a full simulation of all relevant signals in the detector.

The translation of anode and pad signals into charge space points occurs in three major steps: