TRootanaDisplay is an attempt to provide a simple way of making ROOT event displays that can quickly be used to show ADC/TDC spectrum or whatever else you'd like to plot; based on ROOTANA package. There are also other alternative display methods, such as roody and the rootana javascript displays. 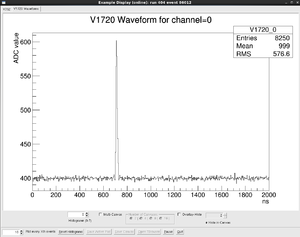 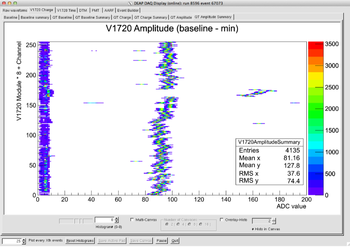 TRootanaDisplay is an abstract base class for event displays. Users need to define a class that derives from this class in order to make an event display. The only method that users must implement is the method AddAllCanvas(), where the user defines which tabs to use.

There are several ways that users can decide to update and plot histograms:

There is no substantial difference between the first two methods. The third method is mainly meant to allow the user to separate the methods into separate files for code cleaniness.

in order to grab the particular canvas that we want plot on.

The program rootana/libAnalyzerDisplay/display_example.cxx shows an nice example plot using all three methods for histogram filling. There is also a more complicated example in rootana/examples/anaDisplay.cxx. A trivial example using just the first method for filling histograms is shown below

The following images try to describe the program flow graphically. 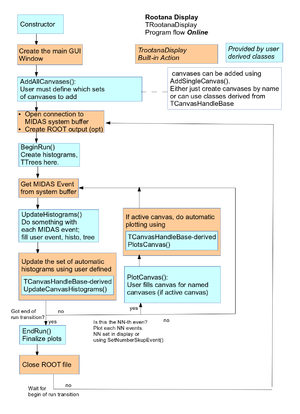 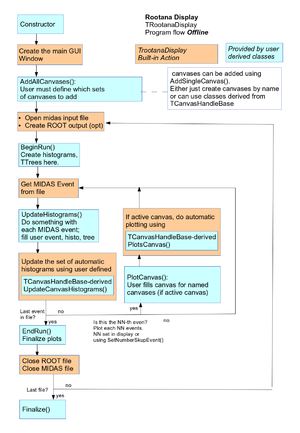 Comparison of RootanaDisplay and Roody

rootana also provides a different way of visualizing histograms through roody and the TNetDirectoryServer. Should the user use TRootanaDisplay or roody? The following are some of the differences between the two tools:

So, in summary: if you are only producing a simple set of ROOT histograms and/or you don't want to do much programming then roody might be the right solution; if you want complicated plots and don't mind using ROOT display classes, then TRootanaDisplay is the way to go.

Of course, the user can easily have a program that implements both solutions and get the best of both worlds.