This page gives bnmr or bnqr DAQ users information about the ISAC EPICS Control Pages and the Access required for running bnmr or bnqr experiments.

The EPICS system is used at TRIUMF for the control system for beamlines etc. Experimenters will need to display the Epics Control Pages in order to run the bnmr or bnqr experiments. They must also ensure that BNMR has been granted write access to the required Epics parameters as described below, or they will not be able to change the relevant beamline controls.

Switch onto a different desktop on linux box isdaq01 (or isdaq06) so the Epics Control page does not clutter the desktop used for running the experiment. Access the epics control pages on isacepics1 with ssh from an xterm window, as follows (if you don't know the password, ask a group member).

You should see the main ISAC EPICS control page come up after a few seconds (Figure 1).

Note
There is no bnqr user account on isacepics1. The bnmr account is used for both experiments and the same EPICS access permission (i.e. BNMR) applies to both.

Most Epics parameters can be read by anyone, but write access has to be granted by the Controls Group. Several experiments have been granted write access to the same polarizer IOCs, and to avoid conflict, only one of these experiments is granted overall Access. During the beam period, and for testing the helicity switching etc, access must be granted to expbnmr.

To check whether expbnmr has access, display the main EPICS control pages.

On the main EPICS Control Page (cf Figure 1) click the button labelled "Access". A page similar to Figure 2 will be displayed. 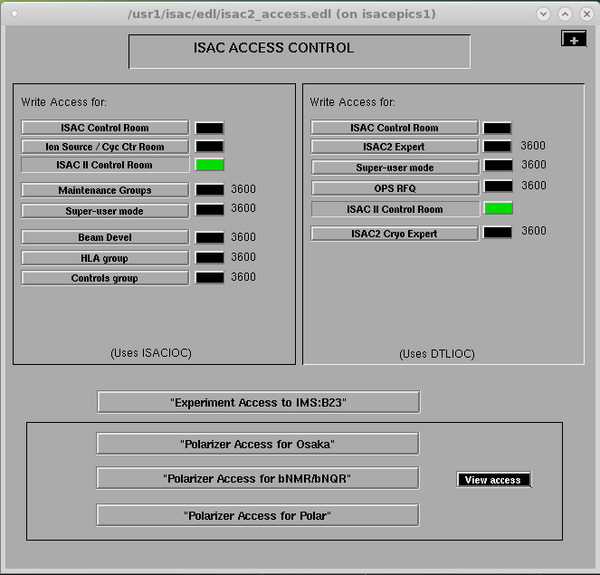 Clicking on the View access button (Figure 2) will show the current access. This should be set to expbnmr as in Figure 3. 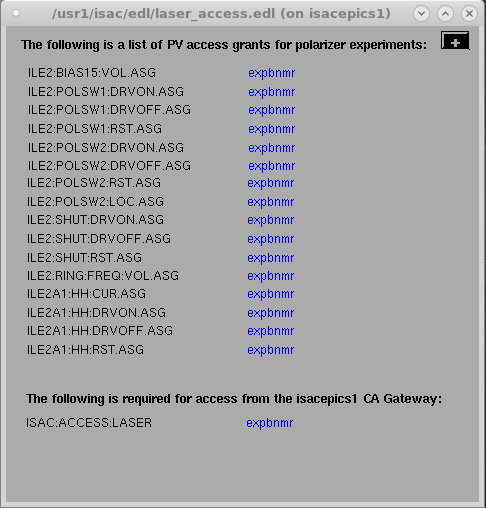 Even when "Access" is granted to BNMR, only those EPICS IOCs to which BNMR has been granted write access can be changed by the experimenters from the EPICS Control pages, e.g. Helicity, NaCell Voltage, and all BNMR/BNQR parameters for single/dual channel mode control.

Some of these parameters are also writable by the bnmr and bnqr BNMR and BNQR VMICs (lxbnmr,lxbnqr). They have been granted write access by the Controls Group to allow the frontend programs to flip helicity and turn the beam on/off via PPG signals. The frontends also use EPICS to scan the Rb cell voltage, for example.

There is NO protection against bnmr and bnqr experimenters changing Epics parameters via the Epics Control pages or the frontend programs while an experimental run is in progress on either bnmr or bnqr. When running in single channel mode, there is also no protection against each experiment interfering with each other by both flipping the helicity for example. Users must ensure that they know what they are doing!

Usage in software (frontend and logger)

EPICS is used by:

The simplest way to use EPICS is to set the environment variable EPICS_CA_AUTO_ADDR_LIST=YES. This means that EPICS will do a UDP broadcast to find which IOC server is handling a given Process Variable, and you do not need to worry about the specifics of each PV. If you add new PVs you can just let EPICS find the correct IOC to talk to.

However, the TRIUMF firewall machines sometimes get into a state where lots of UDP broadcast packets get dropped (technical details according to Steve M: the data and control planes get split across different nodes). This prevents EPICS from reliably finding the correct IOC for a PV, and will report that many PVs cannot be found. For that reason, we can instead set EPICS_CA_AUTO_ADDR_LIST=NO and specify the IOCs of interest in the EPICS_CA_ADDR_LIST environment variable. This setup means that we do not need any UDP broadcast packets, and our EPICS communications work well even if the firewalls are behaving badly.

However, when adding a new EPICS PV to be scanned or sanity-checked, you must find out which IOC they are controlled by! This can be done either by emailing the controls group, or running the cainfo command - e.g. the following command shows that ile2ioc.triumf.ca (142.90.132.2) controls ILE2:BIAS15:VOL:

Using EPICS_CA_AUTO_ADDR_LIST=NO is a much worse experience for shifters. If they want to log/control a PV that isn't controlled by an IOC that is already in EPICS_CA_ADDR_LIST, they must:

Shifters often have many terminals open, and they must remember to source the new environment in each one before running start-all; otherwise it is very easy to restart programs with the wrong environment! Using EPICS_CA_AUTO_ADDR_LIST=YES is far superior unless the network is having issues.

We have 3 common settings that may be used based on whether different parts of the network are having issues. You can change between them using the bash functions use_epics_gw etc.

NOTE: If you want to change which EPICS variables are used, you must change the ~/.bashrc file, source the updated version, then run kill-all; start-all.

All EPICS access depends on the EPICS Environment variables being set up correctly, and linking with the correct version of the EPICS software in epics-base. Check the #EPICS_environment_variables are set correctly.

When having trouble accessing EPICS, first try to read one of the IOCs, e.g. the Na/Rb cell voltage with caget, e.g.

If instead the command times out

this indicates a problem with the EPICS environment variable settings or a firewall issue. EPICS controls are firewalled. Try the caget command several times, as there may be a packet-loss problem where caget only works some of the time (though most likely your environment variables are incorrect, or you're connecting from the wrong machine or account).

From isdaq01, reading any EPICS variable should work.

caput can be used to write to an IOC, e.g.

If write access is false, the value will not change, but no error message will be output.

The frontend and logger use a more user-friendly C++ wrapper around the native EPICS API. You can test this wrapper using the epics_test.exe and epics_test_32bit.exe programs that are built alongside the frontend/logger.