Figure 7 - Detector concept for the ALPHA-g experiment Bottom shows the ALPHA-g antihydrogen trap within the cryostat. Surrounding the cryostat the rTPC with its electronics components for track recording. At the top the Barrel Scintillator with associated analog electronics. 11

Figure 8 - Prototype setup. Initial implementation of the Data path is shown. This setup is to remain active for further DAQ and data quality tests. 12

Figure 10 - Prototype assembled and under test 15

Figure 23 - New design of the mounting of the sensor assembly at both end of the bar. 18

Figure 24 - 3D-Model of the sensors. Visible the bar in pink, the SiPMs in grey and the signal connections in orange. 18

This document is to describe the radial TPC gas system for the ALPHA-g Experiment.

The rTPC detector itself, as well as its electronics and the data acquisition scheme, are entirely designed in-house by the different groups in the Science Technology Department - Detector group, Detector Electronics group, Electronics group, Data Acquisition group. External manufacturing help (Montreal, SFU, York) are already in place and successfully used.

The ALPHA-g experimental goal is to make a first worldwide measurement of the gravity for the antihydrogen atom. This measurement is done in 2 phases

General acronyms or terms used for the ALPHA-g experiment

The ALPHA and ALPHA-II experiments track the antihydrogen annihilation using Silicon Strip Detector (SSD). These devices are placed as close as possible to the trap in order to obtain the best position resolution for annihilation vertex measurements.

For the ALPHA-g, the trap is to be longer and make the use of the SSD too expensive.

Alternative solutions have been considered, such as: 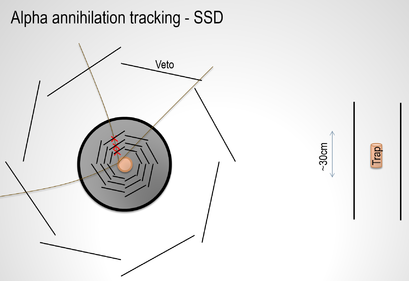 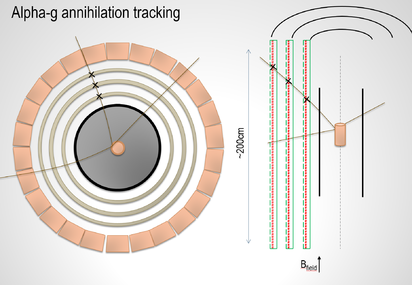 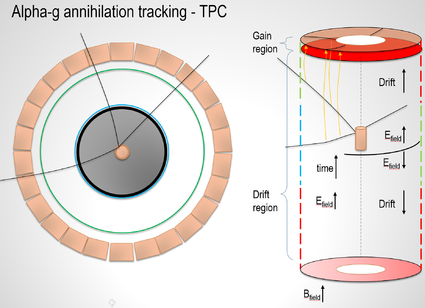 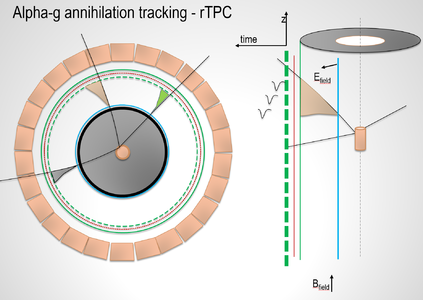 Various simulations studies have been performed to develop and validate the detector concept. The simulation results are presented in the dedicated Detector Simulations.

The ALPHA-g experiment setup is composed of 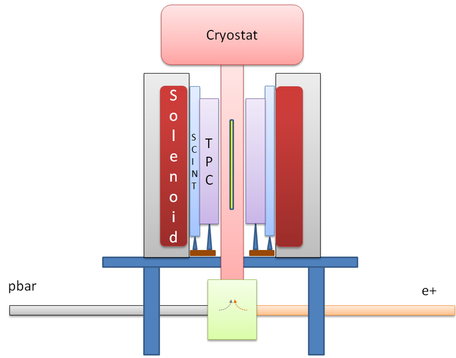 The detector part of the experiment is then composed of multiple components from which this report talks only about a subset of them:

The other components – non-discussed in this document – are related to:

The rTPC is a cylindrical detector composed of an inner cylinder with 2 endplates from where the field and anode wires are strung in between. Part of the electronics is placed on the outer surface of the rTPC and surrounded by the Barrel Scintillator. 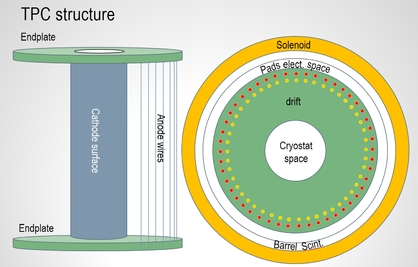 The concept of the rTPC particle detection capabilities requires the registration of the drifted electrons generated by the particle crossing the drift volume. The initial electron is multiplied on the vicinity of the anode wire and an electrical signal is developed on the anode wire. A corresponding induced signal is also visible on the pads placed on the inner surface of the outer cylinder providing another position information (z).

The Detector Simulation Design Notes document is answering the physics operation of the radial TPC. 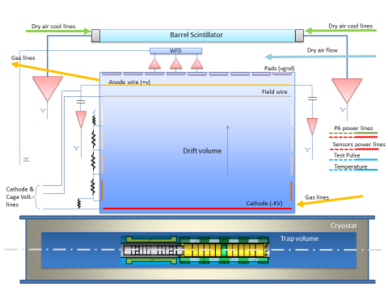 Figure 7 - Detector concept for the ALPHA-g experiment Bottom shows the ALPHA-g antihydrogen trap within the cryostat. Surrounding the cryostat the rTPC with its electronics components for track recording. At the top the Barrel Scintillator with associated analog electronics.

The prototype phase is to construct a section of the overall rTPC length (1/8) with the radial dimensions being not scaled down.

The purpose of this prototype is to confirm several points such as:

This prototype setup will remain available for further data acquisition for data analysis, track reconstruction, but also for upgrading the DAQ to its final configuration.

Fabrication and assembly of the final rTPC will be happening in parallel of the continuous prototype tests. We may perform a beam test at M11 to optimize the analysis routine and to best understand the prototype detector. 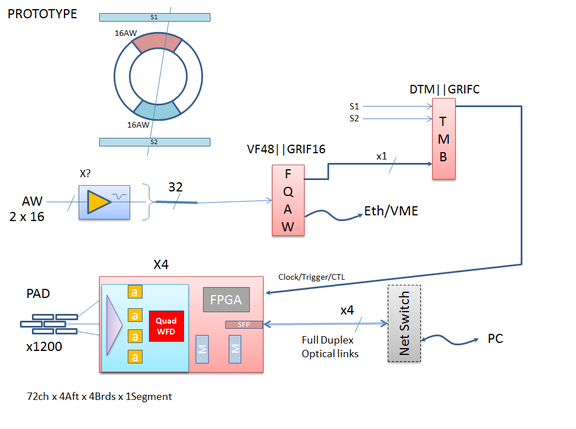 Figure 8 - Prototype setup. Initial implementation of the Data path is shown. This setup is to remain active for further DAQ and data quality tests.

The fabrication and assembly of the prototype has been completed by mid-August. The associated electronics for anode wire is connected up to 8 100Msps digitizers. The data acquisition has been since then in operation. The cathode pad readout electronics is not yet available.

In summary, the different steps to reach this milestones were:

The prototype fabrication highlighted some minor design problems that fortunately were correctable or will be corrected for the full detector. The operation stability of the chamber is acceptable as no HV breakdown have been notified through several weeks of continuous operation.

Presently every channel (anode wire) of the chamber is tested for signal quality. Two “hot wires” have been identified and one of them fixed by “revers-biasing” the chamber. The remaining hot-wire is still under investigation but will not stop the overall checkup procedure of the chamber.

The cathode pad readout board is the next element to be placed on the prototype and we expect to confirm its operation by the end of September. Delays for its realisation are due to the complexity of the PCB layout. 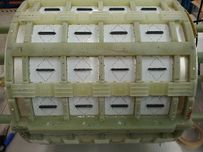 An important fraction of the ALPHA-g project is dedicated to the electronics required for the readout and data collection of the detector. Fortunately, previous development by the “Electronics Development” group can be re-used or used as a starting point for further ALPHA-g requirements. The GRIFFIN data acquisition architecture has similar features that ALPHA-g. Electronics boards are already available and fit our needs. The effort is mostly in the firmware customization, which is largely common to GRIFFIN and ALPHA-g experiment.

One particular new electronics board is the “PadWings” board which handle 288 cathode pads of the rTPC and transmit its data through Gbit optical link. This board uses the ASIC AFTER SCA that we already have experience with for the T2K FGD where close to 300 chips are currently in operation at Tokai.

The overall data acquisition software is left to the Midas package. In particular with the T2K and DEAP and current ALPHA-II experiments, the Midas software has proven its flexibility and versatility. Software effort will be focused on the system integration with the CERN infrastructure in term of data configuration (database), data storage and analysis. Good understanding for this type of specific implementation and issues have already been dealt with for DEAP and ALPHA-II.

The barrel scintillators surround the rTPC over its full length. A primary purpose is to provide cosmic track detection/rejection via time of flight differences. Preliminary MC studies show that timing resolution of ~300ps will differentiate >90% of cosmic ray events.

The barrel is composed of 64 scintillating bars of trapezoidal shape with a length of 2.6m. Due to the solenoid magnetic field and the restricted space at both end of the detector, the readout is done by multiple SiPM per bar (6). The mechanical integration design and the electronics channel have already been defined. See Figure 26 and Figure 27.

Figure 23 - New design of the mounting of the sensor assembly at both end of the bar.

Figure 24 - 3D-Model of the sensors. Visible the bar in pink, the SiPMs in grey and the signal connections in orange.

The ALPHA-g rTPC project doesn’t include the realization and fabrication of the barrel scintillator prior Q1’ 18. But single bar setup is already in place (DetFac) for signal/timing studies, and will be in use based on the resources availability throughout the year ’16 and ’17. While results from the 2 prototype bars are being collected and analysed, the mechanical design of the Barrel Scint. did restart in December 2016.

SiPM for the Barrel Scintillator studies

The SiPM devices from SensL have the advantage to have a very narrow variation of the breakdown voltage across units. When multiple sensors are needed (such as in our case where 6 will be looking at the same light source), the gain variation between units is negligible and permit to operate group of sensors under the same operating voltage.

Figure 23 shows the gain at different bias voltage for different light intensity. The crossing point at gain zero refers to the breakdown voltage. Repeating the test for each individual sensors (8) gives the overall breakdown voltage of 0.4V. The SensL datasheet indicates a variation of 0.5V.

Sensor interface to the scintillating bar

Mechanically the assembly of the sensors and the barrel Scintillator is delicate as the 64 bars are supported by a support ring (Figure 25, Figure 26). The sensor contact to the bar is to be maintained and reproducible. This interface can be air or an optical compound (puck) see Figure 25. Results shows an increase of light collection over 40%. This puck will also provide a soft cushion which should help in the long term, mechanical issues.

Temperature has a great impact on Silicon based devices. This is the case for the SensL sensor as well. The dark noise is strongly dependent on temperature and we foresee to cool the SiPMs in order to reduce this background noise. With a dedicated setup we recorded the dark noise rate based on temperature, Figure 28. The results in Figure 28 shows a reduction of 2 for 10 °C.

The main goal of the barrel scintillator is to provide time information. Test with final scintillating bar geometry using electron source and SensL units (Figure 30) shows an initial time resolution of the order of 450 ps (Figure 32). One possible contributor of this width is due from the solid angle emission of the Sr-90 on the surface of the bar. Resolution improvement can also be expected by correction of the timing based on the pulse charge in addition to the current CFD algorithm used (Figure 31).

This system comprise two set of scintillator circumventing the ALPHA-g detector. It serves the following purposes:

These will consist of scintillator panel pairs external to the magnet, similar to those presently in use in ALPHA2. Their purpose is to provide antiproton counting during initial phase trapping and Hbar production studies. The 2 panels in a pair will be operated in coincidence and as well in coincidences with other pairs.

The design, fabrication and implementation is taken care by the ALPHA-g collaborator of Uni. of York (Scott Menary). The external scintillator is required in late 2017

The Veto endcap detector is to cover the missing coverage of the barrel Scintillator. Initial conceptual design has been put forward, but no final decision has been made on its final implementation.

The following table summarize the characteristics of the ALPHA-g detector in term of mechanical, electronics and services.