This document describes the MIDAS format data banks that are output by the POL frontend fepol_32bit.exe. This frontend controls the hardware for the experiment, and programs the contents of the data banks. The analyzer reads the data from the data banks.

The data are sent out as MIDAS events which contain various banks: HISI HIS0 HIS1 HIS2 HIS3 HSUM CYCL. Some of these banks contain duplicated information (e.g. HISI vs CYCL), but they are all kept for backwards compatibility.

The banks HIS0...HIS3 are the histogram banks for Scaler Input channels 0-3. These contain the cumulative sums of each time bin summed over the number of cycles/supercycle at a particular DAC increment value. Summing all the bins together for each channel should give the same value as in the HSUM bank. The histograms are cleared after each supercycle.

The HSUM bank contains the sums of all the time-bins (output as histograms in Event 5) for each Scaler Channel. The sums are cleared after each SuperCycle.

ADC Channel 1 (user-defined DAC readback) is also output in the #HISI Bank. Since the HISI bank is assembled at a slightly different time to the CYCL bank, the values in the two banks may differ because of jitter on the ADC readback. The average values are generated to average out this jitter.

The pol_data package contains tools for reading midas data and converting it to objects that can be used in python code. It is able to parse data from both the old DAQ and new DAQ. It is able to read both midas files and data from the live experiment. It is used as a basis for both the online and offline tools described below.

The main POL DAQ repository contains a python-based analyzer that can generate histograms and display them on the "Web plots" webpage. The program is called "polana" and can be started using the relevant button the main DAQ webpage.

The "Web plots" webpage can show the following plots:

You can select which scaler channels to display, and limit to only showing data for specific DAC voltages (by limiting which "scan steps" to display).

An interactive GUI for interacting with midas files and converting to CSV files etc was originally created by Tom Proctor and called "main.py". That version required the user to run "mdump" to convert the midas files to text, then parsed those text files. This was error-prone and required tweaks to the parsing code for each experimental campaign.

The new code reads midas files directly in python, and does not require the user to do any pre-processing of the data with mdump.

The program is found in the pol_data repository and is called gui.py. It can be started using the gui alias on isdaq01, or can be installed on your own laptop.

If running on isdaq01, you should make sure to connect with X-forwarding enabled, e.g.

A screenshot of the GUI is shown below. 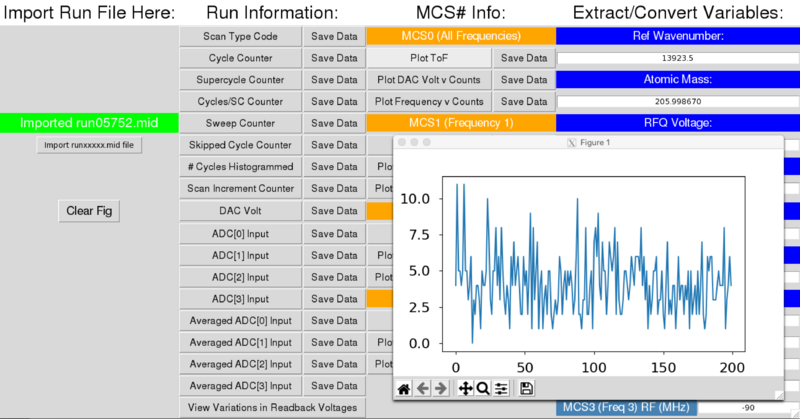