The VME hardware for the POL DAQ system is located in a VME crate in a blue rack on the ISAC-1 experimental area floor underneath the BNQR platform.

Other DAQ hardware required is the Galil RIO DAC/ADC. The VMIC communicates with this module via a private Ethernet connection.

A diagram of the DAQ Hardware setup for the Pol Experiment is shown in Figure 1 below. 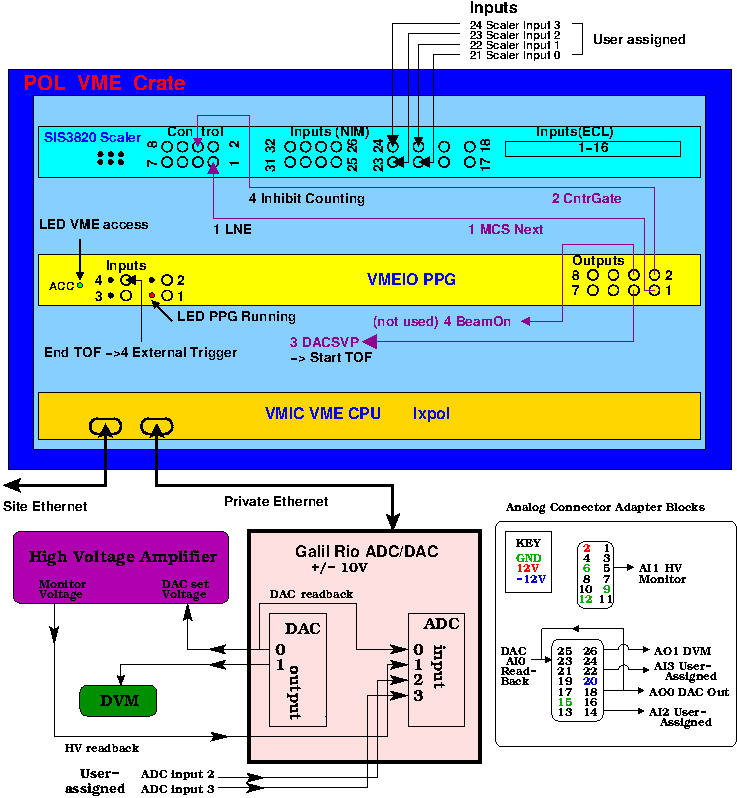 Four MCS (Multi-Channel Scaler) channels are enabled, referred to in this document as Scaler Inputs 0,1,2,3. Input 1 is currently connected to a pulser to give a constant count.

Two PPG Outputs (1 and 3) are used in the experiment (more are programmed but are used for debugging purposes).

Except for the first PPG cycle at the beginning of each SuperCycle, the PPG is started externally by an input signal from the experiment sent at the end of the ToF to the PPG External Trigger input.

Note: The minimum width of the external input "PPG start" signal is 10ns.

Galil Rio Documentation can be found on the galil website. Local copies can be obtained at the links below:

The table below shows the channels in the Galil Rio that are currently used in the Pol Experiment and the typical ranges.

The POL Experiment is presently set up so that the DAC set value is output on Channel 0 of the DAC. This is connected directly to Channel 0 of the ADC to provide a direct readback of the voltage output by the DAC (for sanity-checking during analysis). It is also connected to the HV power supply to drive the output voltage.

Channel 1 of the ADC is reserved for a user-supplied readback. This is connected to the HV power supply output monitor.

The users can connect Channels 2 and 3 of the ADC as required for monitoring purposes. All the channels shown in the table above are read out into the data banks.

The ADC Average values are also sent out in one of the data banks.

The DAC and ADC channel numbers and range settings can now be changed by the users, rather than being hard-coded in to the frontend.

A program has been downloaded into the Galil Rio to perform averaging of the first 4 ADC channels (0-3). A copy of this program can be found in Appendix 1. It takes parameters Filter Window (W) in volts and Filter Factor (F) (both arrays). Default values are F[*]=100 W[*]=0.1 volts. The Filter Window and Factor values for each channel have been stored in the ODB so they can be easily changed. They are located in the ODB at /Scanning/GalilRIOScan/RangeSettings/Filter window and /Scanning/GalilRIOScan/RangeSettings/Filter factor.

The program continually averages the ADC input values. If the difference between the average value and the latest readback is greater than W[i] for that channel i, the average is cleared and a new average calculated. This can be used to detect the DAC having stepped. The Filter Factor F is used to start a new average after a certain number of readings.

How the Frontend Program Works

The Frontend program fepol_32bit.exe controls the DAQ hardware in the VME crate and sends out the data in the form of MIDAS-format data banks. (See POL frontend code for location of code, and how to build the frontend).

At the beginning of run, the PPG program is compiled based on the user's settings (number of time bins etc), then loaded onto the PPG. An example of the PPG pulses that get output is shown below.

In the new DAQ a cycle is defined as the scalers having seen N time bins. That means the PPG program is run multiple times within a cycle (e.g. if there are 100 time bins per program, and the cycle requires 1000 bins, the program will run 10 times). The first iteration is meaningless, as it is started by software rather than the RFQ (so the timing is not synced with any ToF of interest). The first time bin of each iteration is also meaningless, as the scaler has been counting for the entire time between when we sent a signal to the RFQ and when the RFQ sent a signal to us.

Once the scaler has seen all the bins we told it to expect, the data for this cycle can be completely read out and sent to midas banks.

The frontend also keeps track of the buffer level in the MCS, and will read data during the cycle if the buffer is getting full. This means both that the buffer will never get full (causing data loss) and that the final end-of-cycle readout is faster (reducing deadtime).

Once the cycle is ended and data has been read from the scaler, the frontend program increments the DAC voltage.

The next cycle is then started by re-arming the scaler and starting the PPG by a software signal.

The old DAQ had some complicated logic for ensuring that the DAC voltage had actually changed, but in practice these checks were disabled via a flag in the ODB. Similarly, the new DAQ does not do any sanity-checks of the DAC output - it just assumes that the voltage has changed. Note that the readback voltages are stored in the output data file.

First - ensure that the PPG cables are connected to the "Real RFQ" inputs on the yellow plate above the VME crate.

The following settings should be set:

There are two ways to run the DAQ without using the real RFQ.

The name of the MIDAS experiment is "pol" and it is currently run from isdaq01. Relevant Environment variables are set up as follows:

The experimental clients are run on the host machine isdaq01 except for the frontend code fepol_32bit.exe which is run on the VMIC lxpol in POL's VME crate. lxpol has access to the pol user's home directory via NFS.

The main repository uses submodules for some dependencies, so checking out updates requires:

To compile the real software, run the following on isdaq01 from the repository root:

To compile a dummy version of the software that does not talk to the real hardware or EPICS (and which can be run on a laptop):

Then re-compile the POL software.

NOTE
If this is not successful, or the frontend window immediately

start-all can be run at any time during the experiment, and will restart any of the clients if they have died. Clients can also be restarted using the

A script show-windows run on any terminal (logged in as pol to isdaq01) will display the frontend window. An alias show-fe has been set up to run show-windows.

This program by Donald Arseneau is downloaded in the Galil Rio module and performs averaging. It can also be found at